What is real tennis?

Most people, when they think of tennis, think of lawn tennis.

Real tennis – sometimes called “The Sport of Kings” – is the original racquet sport from which the modern game of lawn tennis (usually simply called tennis) is derived.

Real tennis is a mixture of tennis, squash and a game of chess. The court looks like a ‘normal’ tennis court. Looking closer however, one sees that the net is different, there are ‘funny’ corners, different stripes and a gallery.

Real tennis is also known as court tennis in the United States, formerly royal tennis in England and Australia, and courte-paume in France (a reference to the older, racquet less game of jeu de paume, the ancestor of modern handball and racquet games; many French real tennis courts are at jeu de paume clubs).

Tennis as we know it, is invented in 1873. But the origin of tennis exists much longer. The term real was first used by journalists in the early 20th century as a retronym to distinguish the ancient game from modern lawn tennis (even though the latter sport is seldom contested on lawns these days outside the few social-club-managed estates such as Wimbledon). The oldest recorded tennis courts were those built for the gentlemen of the court in Valencia in Spain in 1298.

Players of real tennis often call the game tennis, while continuing to refer to the more widely played derivative as lawn tennis.

Real tennis is still played on about 48 surviving courts in the United Kingdom, Australia, the United States, and France. Despite a documented history of courts existing in the German states from the 17th century, the sport evidently died out there during or after the World War II reconstruction. The sport is supported and governed by various organizations around the world. Game description
The rules and scoring are similar to those of lawn tennis, which derives from real tennis, but are more complex. Although in both sports game scoring is by fifteens (with the exception of 40, which was shortened from forty-five), in real tennis, six games wins a set, without the need for a 2-game buffer as in lawn tennis although some tournaments play up to 9 games per set. A match is typically best of three sets, except for the major open tournaments, in which matches are best of five sets for men, and the best of three sets for women.

Equipment
Unlike the latex-based technology underlying the modern lawn-tennis ball, the game still uses a cork-based ball very close in design to the original balls used in the game. The 21⁄2-inch (64 mm) diameter balls are handmade and consist of a core made of cork with fabric tape tightly wound around it and covered with a hand-sewn layer of heavy, woven, woolen cloth, traditionally “Melton” cloth (not felt, which is unwoven and not strong enough to last as a ball covering). The balls are traditionally white, but around the end of the 20th century “optic yellow” was introduced for improved visibility, as was done years earlier in lawn tennis.

The 27-inch (690 mm) short, asymmetrical racquets are made of wood and use very tight nylon strings to cope with the heavy balls. The racquet head is shaped to make it easier to strike balls close to the floor or in corners, and to facilitate a fast shot with a low trajectory that is difficult for an opponent to return. There are three companies in the world hand-crafting these racquets: Grays of Cambridge (UK), Harrow Sports (US), and Gold Leaf Athletics Ltd (US).

An example layout of a tennis court.

A valid serve must occur from the serving court before the second gallery line, and hit the service penthouse before dropping in the receiving court, marked by the service line and fault line. Corresponding chase lines extend from the centers of the side galleries on both service and hazard ends, including the first, door, second and last. Gallery posts and the net post are marked with circles. Shaded areas are the winning openings, the dedans, grille, and winning gallery. None of these, nor the posts, would be visible with an actual overhead view as depicted.

Manner of play
The service is always made from the same end of the court (the “service” end); a good service must touch the side penthouse (above and to the left of the server) on the receiver’s (“hazard”) side of the court before first touching the floor in a marked area on that side. There are numerous and widely varying styles of service. These are given descriptive names to distinguish them – examples are “railroad”, “bobble”, “poop”, “piqué”, “boomerang”, and “giraffe”.

The game has many other complexities. For instance, when the ball bounces twice on the floor at the service end, the serving player does not generally lose the point. Instead a “chase” is called where the ball made its second bounce and the server gets the chance, later in the game, to “play off” the chase from the receiving end; but to win the point being played off, their shot’s second bounce must be further from the net (closer to the back wall) than the shot they originally failed to reach. A chase can also be called at the receiving (“hazard”) end, but only on the half of that end nearest the net; this is called a “hazard” chase.

Those areas of the court in which chases can be called are marked with lines running across the floor, parallel to the net, generally about 1-yard (0.91 m) apart – it is these lines by which the chases are measured. Additionally, a player can gain the advantage of serving only through skillful play (viz. “laying” a “chase”, which ensures a change of end). This is in stark contrast to lawn tennis, where players alternately serve and receive entire games. In real tennis the service can only change during a game, and it is not uncommon to see a player serve for several consecutive games till a chase be made. Indeed, in theory, an entire match could be played with no change of service, the same player serving every point.

The heavy, solid balls take a great deal of spin, which often causes them to rebound from the walls at unexpected angles. For the sake of a good chase (close to the back wall), it is desirable to use a cutting stroke, which imparts backspin to the ball, causing it to come sharply down after hitting the back wall.

Another twist to the game comes from the various window-like openings (‘galleries’) below the penthouse roofs that, in some cases, offer the player a chance to win the point instantly when the ball is hit into the opening (in other cases, these windows create a “chase”). Effectively, these are “goals” to be aimed for. The largest such opening, located behind the server, is called the “dedans” and must often be defended on the volley from hard hit shots, called “forces”, coming from the receiving (“hazard”) side of the court. The resulting back-court volleys and the possibility of hitting shots off the side walls and the sloping penthouses give many interesting shot choices not available in lawn tennis. Moreover, because of the weight of the balls, the small racquets, and the need to defend the rear of the court, many lawn tennis strategies, such as playing with topspin, and serve-and-volley tactics, are ineffective.

The royal game of tennis is still played by many people. And the numbers are rising. Next to people like you and me there are numerous famous players of real tennis. 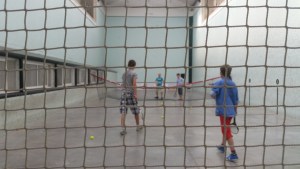 After seeing all these beautiful pictures of courts, reading the stories about real tennis and seeing who actually plays real tennis you may think: I want to play!

We love to arrange a try out for you! Contact us and we are glad to help you out and arrange a game of real tennis at a court near you. We’ve done this several times already and every time it’s our pleasure to see how much people enjoy playing. Whether you are 8 or 88, everybody in good health can play. You don’t need a super condition. You don’t need a chess degree. You only need good sports spirit. And you need to contact us

If you are living in The Netherlands you need to cross borders until we have succeeded in restoring Huis ter Kleef.